New York City area DJ and producer Kered opens a new chapter in his career with the launch of his new label Loot Recordings. Established in 2014, Loot Recordings is an outlet for quality music from an array of producers with a unique sound designed for the dance floor. The sound of loot is sometimes deeper, other times melodic, often bigger, but never the obvious. The first EP is Kered “Find My Way Back” with remixes from Stefano Testa and Cactus Twisters.

The vision and concept of Loot Recordings is to discover and offer producers a creative platform for their sounds that aren’t pigeonholed to a single genre. In addition to discovering sounds, Loot Recordings is a label committed to artist development and not just blindly issuing music release after release.

The original mix features a throbbing sub-bass line with ethereal background sounds and a pitched down vocal and hook to build tension. The Stefano Testa remix is driven by a big room kick, choppy percussion and sprinkled vocal elements that all comes together with an analog synth melody. Finally, the Cactus Twisters go straight for the big room with a monster track with a growling techno edge and low-swinging bass line to keep things moving.

Based outside the New York City area, Kered has released tracks for established labels such as Definitive Recordings, Nervous Records, Witty Tunes and Circle Music. “After focusing my efforts to release music on other labels for the last few years, the timing was right to introduce my own label,” says Kered. “I’m excited to share the sounds of the first EP and subsequent releases with dance music fans worldwide. I think the sound of Loot will appeal to those who like something a bit different that’s infused with quality house and techno sounds.”

Based in Rome, Italy, Stefano Testa is the resident DJ of one of the Italian undergrounds best clubs, Rashomon. With music on Rebirth Recordings, Aloe Musique, Hypergroove and Things Already Seen, his track “Friday Night” was widely supported in the clubs and Ibiza season by Marco Carola. The Cactus Twisters are the Beglian duo of Jey and Ka with releases on labels such as Fone Audio, Monique Musique, Black Swan and Refused Audio to name a few. Their music is often supported by heavy-hitters such as Richie Hawtin, Luciano, John Digweed, Nic Fanciulli and many others.

Kered “Find My Way Back” is available now on Beatport and all other digital music stores Monday, December 1, 2014.

KERED
FIND MY WAY BACK EP 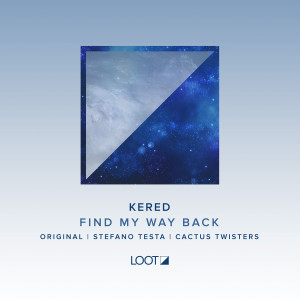